Dear Mum, how the year is flying ˗ look at the date already! Well, we’ve had a very busy week ˗ a rather killing one in fact. We’ve been up at the Wells most of the week doing our Double Bill and though I haven’t really had that much to do it always seems when we’re on a show that life is three times as hectic as at any other time. And I’ve had to do during the show is to work as a dresser ˗ and then only for at the most six people (sometimes someone else with equally as little work would get in first and take over one or two) ˗ and to help David Gorringe, who was stage managing The Opera Rehearsal to get his curtain up and down at the right moment. (Very proud of that we were ˗ never had a bad curtain the whole time!) [The Opera Rehearsal was conducted by Anthony Negus, one of the repetiteurs.] I also made coffee for one of the singers, and got the occasional bottle of something for others. Now according to rights this shouldn’t have made me tired, but it seemed to.

Of course, as well, since we had all day free, we were more inclined to spend it out somewhere, and this is very tiring, particularly if you’re walking a lot. It’s amazing how much exercise you get in this place, just trying to get somewhere. [Something we found even more tiring when Celia and I went back in 2007 and found ourselves walking continually in spite of buses and the Tube.] You might imagine at first that to go everywhere by tube or train is very easy on the feet, but in actual fact, the miles one must walk through the underground corridors I wouldn’t like to count, and because the escalators go at a rather slow speed, most people walk up and down them ˗ which can be very tiring ˗ the steps are much higher than in normal stairs. Plus the fact that though the trains run up till one or two[in the morning], the tubes and buses stop about 12, and to catch a late train, you have to walk through the city, which may mean a half an hour’s walk. And a quick one too, if you don’t know how long it’s going to take you.

We didn’t get very good write-ups for the show ˗ tho’ The Opera Rehearsal  came off under the critics much better than anyone expected, and funnily enough people said they enjoyed it. Of course they only had to sit through it once. None of the crits I read said much about Gianni Schicchi; in the hands of this cast it couldn’t fail to be at least a reasonable success, but in actual fact I think it came off extremely well. [I seem to recall Alan Opie was Gianni Schicchi.]

It’s a fabulous piece, full of glorious music very well orchestrated, and is a marvellous piece of theatre as well. It’s about a group of relatives who are mourning the death of Buoso Donati, at the opening; they mourn him even more when they find out he’s left all his wealth to the local monastery. The youngest of them calls in Gianni Schicchi (because he’s in love with Schicchi’s daughter, and because he knows that Schicchi has a cunning mind and may be able to alter the will). Though the relatives at first object, he does come and alters the will by impersonating the dead man in front of the lawyer, but then leaves all the best stuff to himself! And kicks all the relatives out of the house ˗ except the young one, who gets the best of both worlds by marrying Schicchi’s daughter and inheriting the wealth that Schicchi now has! ‘Oh my beloved father’ is the big hit tune, but it has lots of marvellously characteristic stuff for the relatives. There’s a great moment late in the piece, when the relations find that they still have nothing, and storm out of the house pillaging what they can as revenge ˗ the orchestra rises up and drowns the screaming and yelling on stage, and the brass take over and drown everything in great blasts of gallumping type music as they all leave, and leave the place in a mess! Then the peace comes again as the young lovers come back on stage and sing the rest of their duet with fabulous pre-Hollywood lushness.

On Friday night after the show, Mike, David Gorringe, Dorothy Iredale (nice wee soul, but rather mixed up, perhaps ˗ she has a great career ahead, though, I think [the usual Crowl elder statesman view of other people ˗ Dorothy gets a few mentions in the next years after this in Opera magazine, but there’s nothing else about her on Google] and a couple of others went back to Hazel’s, and eventually, Dave, Dorothy and I stayed the night ˗ sleeping on a variety of things in the flat ˗ I got a camp stretcher which was only comfortable because I was so tired ˗ Dave slept on cushions on the floor, and Dorothy slept in Hazel’s room on an extra bed. 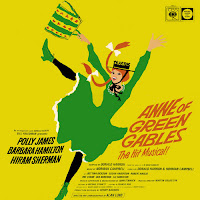 We’d gone somewhere most nights after the show, and I hadn’t gotten home until about 1.30 each night. On the last night when there were two parties to go to, I finished up going home to bed about eleven. I was dying on my feet, and anyway had to do some copying of parts for Bamford, the next day. I spent all day Sunday doing this actually ˗ and really enjoyed it. It’s the first time I’ve had Anne of Green Gables that goes on here shortly, and the score was written in the same key for every instrument which meant that in several cases I not only had to copy from the score but transpose the notes so that the instruments could play the right sounds. [This show opened on the 16th April and ran for 319 performances.] You see (I’ve possibly told you before) some instruments are known as transposing instruments, and in order to get them to play in the same key as non-transposing instruments you have to write in a different key! But it was a lot of fun actually, and generally speaking Bamford seemed reasonably impressed. He’s never enthusiastic, but always finds something a little wrong, just to keep you in your place, I suppose!
copying to do without Bamford being around around, and found I was getting on very well really. It’s a song for a show called

The dressing, during the show, made a change too; some of the costumers are unbelievably heavy, and the poor kids were like walking ovens. They fasten everything up with hooks and eyes etc ˗ no buttons.